Earlier this year, I was accepted in to a program through CCCADI called Community Arts University Without Walls (CAUWW) in which we went to do an intensive summer semester at Interamerican University in Puerto Rico. Many amazing things came out of this fantastic adventure for me, including my starting a blog, Travesia Artistica (ArtisticVoyage), conceptualizing an art event (details TBA) and creating a series of paintings about my experience. Actually, in the last few months since being back from Puerto Rico, I have completed ten new paintings and I’ve created a page on ArtPal to display them. Please visit my gallery at: www.artpal.com/loriecaval to view my new work (all are for sale as prints/products!). Eventually I will start uploading some of my older painting images there too.

Here are a few examples of paintings from my Puerto Rico/Boricua Sankofa series: 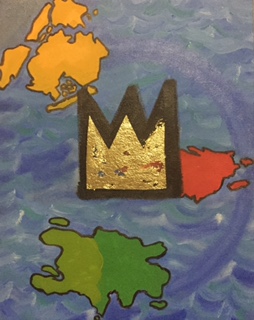 While traveling in Puerto Rico, I noticed a lot of the street artists had incorporated Basquiat’s crown in to their pieces. I am a huge fan of Basquiat and it got me to thinking about how he still captures the imagination of so many people, how many feel strong affinities towards him, and how often his crown appears in all sorts of art. Being a self-taught artist, a native-New Yorker with parents of Puerto Rican and Haitian descent – I wanted to represent his multi-ethnic background by showing those islands – and his ubiquitous gold crown dominating the foreground.

While traveling in Puerto Rico, the Flamboyan tree’s bright red pop can be seen throughout the otherwise green landscape. The Flamboyan is a typical symbol of the island. I created this painting about a girl taking a nap, curled close to a majestic Flamboyan, not just sleeping, but dreaming within it, as it blooms beautiful and bright with her imagination.

I’ve always been drawn to cowrie shells and find them to be beautiful. I thought it was a great representation of Puerto Rico because cowries are easily found on the Caribbean island. As well, the cowrie is a symbol of spiritual significance for certain religions of the African-diaspora and throughout Latin America.